The importance of thermal bridging

What is a thermal bridge?

A thermal bridge, also called a cold bridge, is an area of a building construction which has a significantly higher heat transfer than the surrounding materials. This is typically where there is either a break in the insulation, less insulation or the insulation is penetrated by an element with a higher thermal conductivity. Where the building is situated in a cold climate (such as the UK) this can result in additional heat loss at these points. An example of a thermal bridge is shown below, where timber penetrates the insulation and enables additional heat loss: 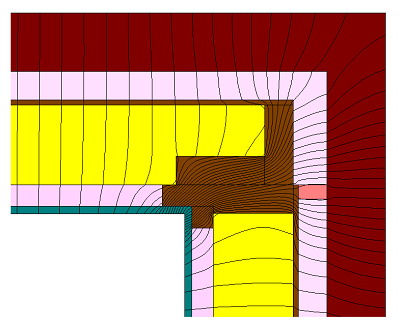 The heat loss associated with these thermal bridges is expressed as a linear thermal transmittance (Ψ-value) - pronounced as 'psi-value'.

The surface temperature factor (f) is also calculated as part of the assessment procedure, and is used to assess the risk of mould growth, which can have significant health implications.

Thermal bridges occur within the building fabric where, because of the geometry or the presence of high conductivity materials, heat flows are two or three dimensional.  For many situations, simple calculations are no longer sufficient to determine thermal performance correctly and it is necessary to analyse the construction using numerical modelling.  A number of numerical modelling software packages are available where these specify the geometry, the materials and the boundary conditions of the model in two- or three-dimensions as appropriate.

The current BRE BR 497 publication (Conventions for calculating linear thermal transmittance and temperature factors) details the conventions that should be followed by thermal modellers to produce consistent, reproducible results and so help the push towards ambitious energy improvements and healthier buildings. The conventions relate to the use of thermal modelling software to assess the ‘as designed’ thermal performance of building junction details, products or elements.

Where details do not conform to Government Accredited Construction Details, their thermal performance should be evaluated using thermal simulation software.

The industry (primarily focusing on developers and designers) relies on having these thermal performance figures calculated and supplied from credible and reliable sources to ensure that accurate and reliable figures are readily incorporated into the National Calculation Tools, such as SAP (Standard Assessment Procedure) and SBEM (Simplified Building Energy Model).